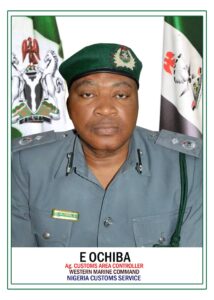 The Western Marine Command, of the Nigeria Customs Service(NCS) has hauled a gargantuan sum of 747.2b within the first six months of, 2021.

In statement made available by the commands image maker, Isa Suleiman revealed that these seizures represented a strong indication that the operatives of the Command are combat-ready in policing and enforcing the Federal Government Fiscal Policies in spite of obvious difficulties.

According to the release, the WMC made a total of 30 seizures from January to June, 2021 with Total Duty Paid Value (DPV) of Seven Hundred and Forty Seven Million, Two Hundred and Two Thousand Naira (#747,202,000.00) only.

The Customs Area Controller (Ag), of the command, Deputy Compt. Enonche Ochiba said the unprecedented seizures were made as a result of the strategies put in place in terms of 24 hour patrol, surveillance, intelligence gathering and determination of operatives in making the waterways unbearable for smugglers.

Ochiba commended the officers and men of the Command for achieving these feats, he urged all well meaning Nigerians to support the Command in providing information that will aid
its performance.

He commended the CGC and his management team for the motivation and support given to the Command leading to seamless execution of it’s statutory responsibilities.

He calls on law abiding Nigerians to go about their legitimate businesses in accordance with the laws of the land as the target is always on the nefarious activities of clandestine economic saboteurs and smugglers.