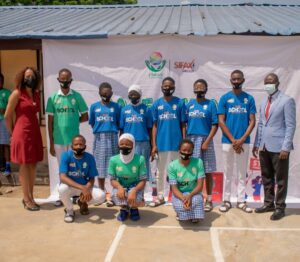 200 students drawn from selected public schools in Lagos State have been trained on various ways and means as well as strategies to live a drug-free life and how to avoid pitfalls of juvenile delinquencies.

In a statement made public by SIFAX, Lilian Azu, CHESRI’s Executive Director, said the training was aimed at creating and promoting awareness about the dangers of various juvenile delinquencies that are prevalent among secondary school students in the state and to equip them with the right knowledge to combat such menace.
Some of the topics focused on during the training include: Basic CPR skills, dangers of drug abuse, menstrual health and sexual abuse. She lauded SIFAX Group for supporting the initiative, adding that the students trained would be supported to become ambassadors who will in turn train and guide other students.
In the same manner, Olumuyiwa Akande, Head, Corporate Communications, SIFAX Group while speaking at one of the schools, emphasized the importance of safety education among students while reinstating SIFAX’scommitment as a socially-responsible establishment in supporting projects that are beneficial to the society. According to him,
“At SIFAX Group, we believe that safety is synonymous with prosperity. It is only a safe society that translates to a prosperous living. This is the reason we have thrown our weight behind this “Safe School Initiative” in order to equip the young ones with the skills needed to build a bright future. From what we have seen so far in the training, we are convinced that projects of this nature are needed in all our schools and as a company, we will not relent in our support for such initiatives,” he said.