The Minister of Transportation, Mu’azu Jaji Sambo has presented a budget of N92,633,608,218 only, to the Joint Committee of the Senate and the House of Representatives on Land and Marine Transport for the Ministry and its agencies for 2023 fiscal year.

Hon. Sambo also informed that the Ministry through the support of the Joint Committee is implementing the Nigeria Railway Modernization project and progressively expanding the Railway Network through yearly budgetary appropriations, following the challenges being faced in securing counterpart funding through loans.

While disclosing that the implementation of the Kaduna – Kano, Port Harcourt- Maidugiri and Kano-Maradi segments of the Railway Modernization is ongoing with the  Federal Government counterpart funding in the 2022 appropriation, while expecting the Federal Ministry of Finance to conclude negotiations of the loans with the Infrastructure Development Finance Institutions of the Chinese, Portuguese and Turkish origin to implement the projects.

He however, solicited for favourable budget consideration. In his words: “Permit me to also report that the Lagos – Ibadan segment of the Lagos – Kano and Itakpe to Warrii railway project are fully operational and receiving patronage from the general public. To reach practical completion on these projects, some aspects of works, including construction of  Overpass Bridges, connection to the National Grid and other ancillary provisions have to be completed. Therefore, adequate funds need to be provided in the 2023 budget to facilitate the practical completion of the projects”.

On the unfortunate incident on Abuja- Kaduna bound train, the Minister said:
“while recording successes achieved in the Railway Subsector, permit me to also mention the sad occurrence of the Abuja – Kaduna Rail incident. With the release of those abducted, the Ministry plans to commence operation on the line, but not without taking proper precaution by installing necessary security gadgets to monitor the line and forestall a reoccurrence. It is our hope that Distinguish Senators and Honourable Members would assist the Ministry in achieving this plan”.

Sambo used the opportunity to further emphasize that the Ministry as part of its mandate  has continued to pursue the implementation of Government policies in the Land Transport Sub- sector in the country, including issues relating to the  Economic Community of West African States (ECOWAS) protocols and conventions entered into in respect of the Sub- sector.

Speaking on the National Freight Offices at Iiela, the Minister said: “we have achieved significant progress in completing the ongoing National Freight Offices at Iiela Jibiya and Idiroko in addition to other Land Transport Projects and with your support, the capturing of all these projects and programs as proposed before you in the 2023 Budget proposal will assist us further towards actualizing the desired goals”. 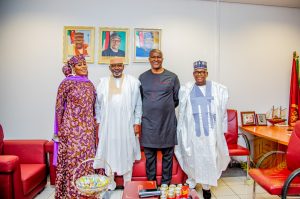 While giving the assurances that the Committees will support the Minister and the agencies to succeed, Goje enjoined them to see that the budget is implemented faithfully “to deliver government intentions and democracy  dividends to Nigerians”.