The Comptroller Malanta Ibrahim Yusuf, led Apapa Customs Command ,has blazed the trail as the first command in 2022 to have generated unbelievably revenue of N1.022 trillion , which is 16.7℅ higher when compared to what the command generated in 2021.
The Apapa command , undaunted in its revenue drive, was able to achieve this feat, despite the glaring economic challenges in the country , and unstable exchange rate amongst other economic variables.
These notwithstanding, the Command recorded a revenue generation of one trillion, twenty two billion , five hundred and thirty million, five hundred and twenty three thousand, six hundred and ninety nine naira, four kobo(#1,022,530,523,699.4) for year 2022, making it 16.7% higher than the eight hundred and seventy billion, three hundred and eighty eight million, three hundred and forty thousand, six hundred and fifty naira, sixty five kobo (#870,388,340,650.65).
The Area Controller , Apapa customs Command, Comptroller Malanta Ibrahim Yusuf revealed this on Thursday, while addressing the press.
Comptroller Yusuf said the feat was made possible because of the resilience of men and officers of the command in blocking revenue leakages and ensuring all unpaid declaration and unutilized PAARs were traced and accounted to the Federal Government accounts.

Comptroller Malanta disclosed that,” The central concern of the service is to deploy technology to automate processes and procedures in maintaining a feat between trade facilitation, revenue generation and security of the nation.”
He said as part of the command’s trade facilitation initiative, ” Officers have been selected, trained and dedicated to address complaints through dispute resolution and ensure transaction within our systems are monitored with precision and control.We will continue to improve on our effort to achieve excellence in service delivery”.
On anti-smuggling , Comptroller Malanta noted that the command made a seizure of 157 containers with duty paid value (DPV) of #14.4billion as a against 102 containers with DPV of #32.8billion seized in year 2021.

He said this was made possible as a result of the command intensifying its anti-smuggling operations through leveraging on its technological infrastructure in ensuring illicit trade posing threat to the nation’s security and wellbeing of the society are being detected and controlled from finding their way to the society. 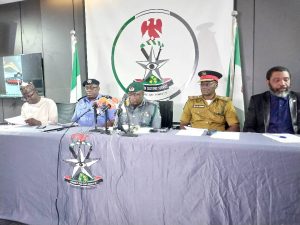 to move beyond its potentials in ensuring synergy and collaboration with other stakeholders in the port to address the menace of illicit importation.
“Our records shows that fake and prohibited frugs without necessary NAFDAC certification and overdose drugs of tramadol top the list of seizures made last year”
” Oher items seized include codeine syrup, foreign parboiled rice, vegetable oil, processed/unprocessed wood, used clothing’s etc”.

He said a total number of 60 suspects were arrested in connection with some of the seizures and are at various stages of investigation and prosecution by the appropriate government agencies.
On export trade, Comptroller Malanta noted that ” In line with the federal government diversification of the economy in non-oil export , the command recorded a total of $68.5 million Free On Board (FOB) Value with a naira equivalent of #28.2 billion on non oil commodities with a total tonnage of 6.4million metric tonnes exported through Apapa port.

His words,” The need for compliance has always been the thrust of our meetings. We continue to sensitize them on the need to comply with extant trade guidelines for faster and cheaper clearance of cargo and to avoid losing their investment and possible prosecution.

“On this note, I want to specially commend our compliant traders who do sincere declarations, pay accurate duty and obey extant import and export guidelines without violating the prohibition lists, Apapa will continue to create a conducive working environment for you and to protect your investment” the Apapa customs command boss, affirmed.
High point of the event was the decoration of some newly promoted officers of the command
Those decorated include :4 controllers, 10 Dc’s, 6 Ac’s, 8 CSC;5 SC, and 4 DSCs.
Meanwhile , some stakeholders were given letter of appreciation by the command , for their contribution towards the growth of the command.Some of the beneficiaries include; the Nigerian Flour Mills, APMT Terminal, Eko Support Services, ENL Consortium, Webb Fontaine, Ocean Glory, DSS amongst others.