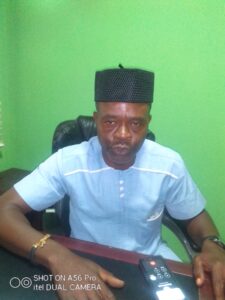 The newly sworn in Chairman of the National Association of government approved freight Forwarders (Nagaff), Fwdr. Prince Eze Uchendu has rolled out an action plan to achieve sustainable success. He says the target is to usher in a sustainable freight forwarding practice within Apapa port and every other bonded terminal attached to Apapa port.

According to him, “there are noticeable loopholes with operations of the Terminal operators which my administration intends to address, the Shipping companies and terminal operators have been extorting Nigerian freight forwarders over a long period of time and we have noticed with dismay, the mute treatment accorded this shenanigan by our past chairmen. We are going to workout modalities to address this by sitting on a roundtable with those involved to move the Chapter forward.”
The loopholes he said, are already being worked on by a technical team. The administration will want to quickly take care of some of these key areas where the terminal operators are failing, areas where they have failed to render good services, as demanded by Nigerian freight forwarders and the Nigerian government.

His administration, he said is also looking at arbitrary charges by terminal operators and Shipping companies. These according to Uchendu, are two major issues which he intends to tackle first.

He afirmed that to achieve anything, his regime would have to first strengthen the existing cordial relationship with members of the Association and chapter, their relationship with Nigeria Customs Service will also be looked at.
Second, is to call the terminal operators and shipping companies to order.

The Nagaff Chairman however, stated that he will let the Shipping companies and terminal operators know that it’s no longer “business as usual, those things they cannot do in their mother countries are not also going to be allowed here henceforth. We cannot afford to allow them do these things,” he emphasised.

Continuing he said, ” when you look at the current debit Note being issued to importers and their Agents, you will see some unimaginable increases, right from the Port charges. We know what it was when the NPA was there. We shall also look at their working efficiency and service delivery. Most of them are not up to scratch yet and I think we will be flashing our light on the bonded terminals under the Apapa Command also “most of them are not worthy to be licensed. They are not fit to operate as bonded terminals. Just take a look at most of them, a place where you see someone combining 2 to 3 plots of land to start a bonded terminal, without the requisite equipment and technicalities, that is a no! no!!

Dovetailing into the activities of the shipping companies, the Nagaff Chairman said that even though empty containers have been routed to the Ikorodu terminal, ” we have to make it it compulsory for every shipping company operating under Apapa to have a proper Holding bay, where these empty containers will be un-stuffed,” he said.

Uchendu reiterated his administration’s readiness to tackle the menace of the Terminal operators. According to him, “the previous regime had written to them, complained, without any serious impact. This time around, it’s going to be a different ball game, because my Exco members are serious minded Individuals and I don’t think it’s going to be business as usual. These people are extorting Nigerians.”

He accused the APMT of altering the Port ACT, ” if you go into the Port right now, you will discover that the APMT has seriously altered the Port ACT,” he lamented.

Continuing, he said, ” there was a master plan for Apapa Port, most of the sheds have been dismantled by the APMT without recourse to the master plan of the Port.

Another one is the practice by the APMT to send containers to a section called ‘trouble booths,’ a corner where your containers can be kept from days to weeks unending without your consent and when you ask, they will just tell you it’s trouble booths. This administration will not take this, we will not like to hear anything of sort, in as much as trouble booths is not instituted in their country, we shall not allow that here, under my watch,” he said.

When asked to mention some of the bonded terminals not living up to expectation, the Chairman retorted by saying that 99.9 per cent of all Bonded terminals are I’ll equipped.