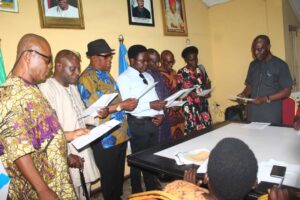 By Jerry Aguigbo
Mrs Udeme Clement has made history by becoming the first elected chairman of the NUJ Powerful Pen chapel.
Udeme won in a keenly contested election observed by the Chairman, Mr Leye Ajayi and executives of the Nigerian Union of Journalists, Lagos Council on Wednesday, in Apapa, Lagos.

The Powerful Pen Media chapel was organising it’s first ever election since inception, as the previous executives were appointed on interim basis to hold forth till this historic election.
At the election, Udeme ran against me Lucky Onyeji(LOD. Onyeji), in a tightly contested race,which won with 17 votes, as against LOD’s 12.

Other winners at the election are: Mr Asuquo Nuwak, who ran unopposed as vice Chairman, Mr Silas Onuoha, who was elected as Secretary General, Dili Utomi as Assistant Secretary and Mr Patrick Onugbor(unopposed)as Financial Secretary. Other winners at the TPPMC election are, Mr Joseph Njoku, Internal Auditor and Mr Ossy Onyewenzi who became the new treasurer.
The Victor’s were sworn into office by the NUJ Chairman, who advised them to close ranks with other members to ensure the upliftment of the Chapel by working assiduously in peace and tranquility.