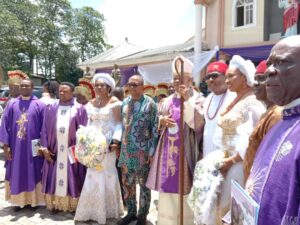 “In life, we loved you dearly,
In death we love you still.
In our hearts you hold a place,
no one else will ever fill.”
The above quote was exactly what the Nwabunike’s, as represented by Hon. Iju Tony Nwabunike had in mind and replicated, with the pomp and pegantry which became the burial of their mother, Nneora Maria Adaobi Nwabunike (Iju Wagon).
It was indeed a bitter sweet memory as Late Adaobi Nwabunike was brought into the Sacred Heart Catholic Church Ukunu Eziora Ozubulu in a Chariot befitting Kings and Queens, the Obsequies for the Nwabunike Matriarch began in Ernest, with her final visit to the church where she got her final rites as a good Christian, supposedly in preparation for eternity. 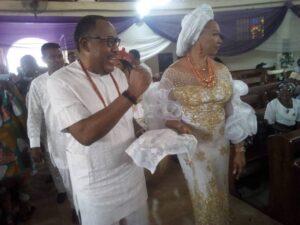 It however was such a glitz, with the reception following the conclusion of the burial rites. It was a spectacular show put together to entertain the high and mighty who attended to pay their final respect to the Departed. 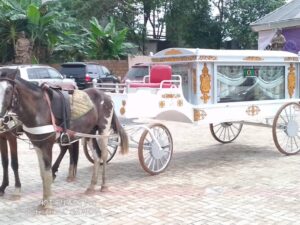 It was a carnival with lots of razzmatazz, with the Brass band of Uyo and other entertainers showcasing and trilling the audience which comprised of a former Governor of Anambra State, His Excellency, Peter Obi, serving senators, House of Rep. members, Commissioners, business moguls, captains of industries, amongst other notable dignitaries who drowned out the looming inclement weather. 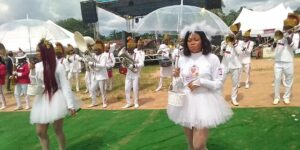 August 27, 2021 would remain in the memory of people of Ozubulu and visitors who stood up for the Nwabunike’s, it was indeed a day Ozubulu and other neighbouring towns stood still for Late Maria Adaobi Nwabunike, (Iju wagon).