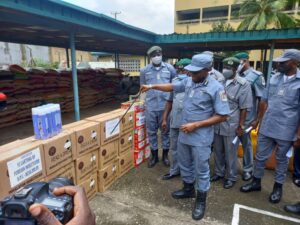 The Oyo/OSUN Command of the Nigeria Customs Service has moved to nip illegal minning of precious mineral resources in the bud. The Minning Taskforce Team according to the Command’s Area Controller, Abdulkadir A.R, was created to comb the nooks and corners of both Oyo and Osun States respectively, in search of illegal mining operators who have failed to register their existence with the Service to enable proper monitoring, statistical data analysis and control of Precious Materials (Ornamental Stones) that are mined and exported to foreign countries.

Customs Area Controller, Oyo/Osun Command who made the announcement during a press briefing, recalled that various special task forces had been setup previously amongs which were the Operation Fish-Out, Excise Task Force, PMS Task Force before the introduction of the latest team.
He appealed to companies engaged in mining operations of precious stones and other national mineral assets within Nigeria, to register their operations with the Nigeria Customs Service to avoid embarrassment and sanctions in accordance with relevant sections of the Customs and Excise Management Act (CEMA) Cap C45 LFN 2004. 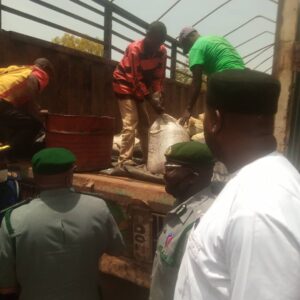 Revealing why his Command went this route, Abdulkadir says, “In the midst of the recent security challenges across the country, we have sharpened our intelligence, revenue and enforcement capabilities to fight smuggling and enforce compliance with reference to extant laws guiding our procedures and rules of engagement.”

He said the Oyo/Osun Area Command has remained steadfast and committed to enforcing government policies in contribution to the growth and socio-economic development of the nation pointing out that the Comptroller-General of Customs, Col. Hameed Ibrahim Ali (Rtd.) has mandated that all laws, policies and directives of the federal government in increasing the economic potential and strengthening the political standing of Nigeria in the committee of Nations must be adhered to. 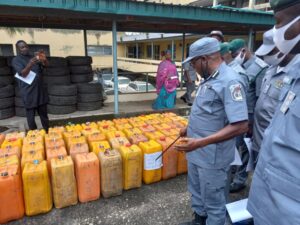 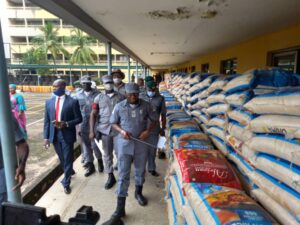 He maintained that It is worthy of note that the command made history by collecting an excise duty of N10,658,695,609.4 in the month of June; which is the highest collected in a month in the history of the command.

On the anti-smuggling drive,he stressed that the command made 50 seizures and 8 detentions resulting in a Duty Paid Value of N66,976,000 .

Some of the seized items intercepted by operatives of the Nigeria Customs Service,Oyo/Osun Command on display
Within this period, the command, also made a seizure of 525 kegs of 25ltrs each and 2 drums of 100 litres each of Premium Motor Spirit (otherwise known as Petrol) by the recently inaugurated PMS TaskForce. He confided that upon approval from the Headquarters, they would be auctioned and proceeds remitted accordingly.

He said the Command also made a detention of 1 unit of 2017 Honda Accord ,Sedan car along Lagos-Ibadan Expressway pending presentation of necessary Customs document.
Abdulkadir said “There were 2 suspects arrested during this period. However, they have been granted bail pending determination of their cases.
“These achievements were made possible by the dexterity of my officers, who have committed themselves to serving the Nation and making Oyo and Osun States better for the citizenry.

“While the CGC has directed more stringent measures to further strengthen the interception capabilities of customs officers in corroboration with the extant laws and regulations guiding import/export procedures of the country, we have carried out our enforcement and anti-smuggling activities with utmost professionalism, caution and intelligence gathering.

However, the called on the populace to join hands with his Command to fight this illicit trade.
“We urge the public to cooperate with the Nigeria Customs Service in the implementation of Government Fiscal Policies to help improve the Economic and Social welfare of the nation.

According to Comptroller Abdulkadir, none of afore mentioned achievements would have been possible with out the doggedness and cooperation his offers and special units. Worthy of mention were also the Customs Intelligence Unit, Customs Police Unit, Joint Border Patrol Team, Federal Operations Unit and the Strike Force Team for their contributions and synergy in the course of our duties.

Emphasising on the collaboration with sister agencies either through information or joint operations , Comptroller Abdulkadir therefore craved for strengthened synergy with the DSS, Nigerian Army, Nigerian Air force and the Oyo State Operation Burst team, even as he thanked them for their dependability and commitment.