The Oyo/ Osun Customs Command has yet again, showcased another huge seizure of petrol and Diesel around the Oyo/Osun axis of control.
Comptroller AR. Abdulkadir, the Area Controller who led newsmen round the
Seizures said, the newly constituted PMS taskforce has acquitted itself pretty well, intercepting and confiscating 15,700litres of petrol and 1, 758 litres of Diesel from smugglers bent on circumventing extant laws.

” You will recall that about 3 weks ago, the Command displayed a huge quantity of premium Motor Spirit (PMS), intercepted from various bushes within the States, the seizures here, today is the achievement of the PMS Taskforce,” he said. 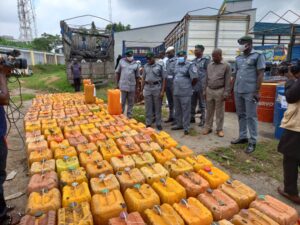 Continuing, the Controller warned those engaging in illicit trade to desist, “We are not here to joke. We have a duty to generate revenue and suppress smuggling to the barest minimum within the Oyo/Osun area of coverage. while ensuring that prohibited items are not allowed into our jurisdiction.

According to CAC, the products would be auctioned and proceeds remitted accordingly into the federation Account.

He lauded the collaboration between the Customs and other
sister agencies, Nigerian Army, Nigerian Airforce and Operation Burst.

“I want to appreciate Customs Intelligence Unit, Customs Police Unit, Joint Border
Patrol Team, Federal Operations Unit and CGC taskforce for their
contributions and synergy in the achievements made so far, besides the newly inaugurated PMS Taskforce.