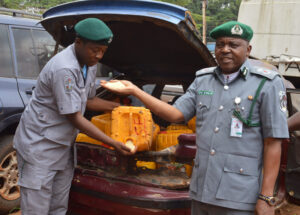 The Nigeria Customs Service Area 1 Command Ogun renown for her dexterity and tough stance against smuggling and a Maverick touch in trade facilitation, has made gains of it’s efforts to rid the borders of Nigeria of illicit and unwholesome activities of daredevil smugglers with a seizure of 58 trailer-loads of smuggled parboiled rice and attracts Duty Paid Value (DPV) worth N834, 765, 27300, all within six months of 2021.
Disclosing this was the Command’s Area Controller, Peter Kolo in Ogun state recently.
He revealed that the command has made among others, a seizure of 34, 540 bags of foreign parboiled rice of 50kg each, an equivalent of 58 trailers.

Other seizures according to the Controller, include: Vegetable oil,31 kegs of 25 litres each, 1,514 wraps of cannabis Sativa, and 2,224 kegs of PMS among others.
Kolo revealed that the command also generated total revenue of N15, 261,074.00 within the period under evaluation which mainly proceeds of auction sales of seized petroleum product PMS and metals.
According to him, “it should be noted that the federal government of Nigeria’s directive on border closure is still subsisting, hence there is no revenue generated from imports activities’’. 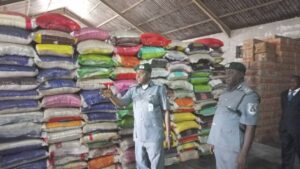 Comptroller kolo also noted that the intelligence network in the command is still very active and it is being deployed in virtually all its operations which have been yielding greater success.
Some other monumental achievements also recorded are: 24 Units of motorcycles ( means of conveyance), 84 Bails of Secondhand Clothing and 12 Sacks of Used hand bags. Other seizures recorded in their various quantities are: Sugar, 30 bags of 50kg each, Tomato Paste, 51cartons, Used Vehicles, 410 Units. All these are among the year 2021 incredible performance from Ogun1 Command.
“We, therefore, use this medium to warn criminal elements in the state to desist from their smuggling activities as each of the three plans will be met with stiff resistance, adding that the command will make arrest and inflict gross financial injuries on such perpetuators’.

“It suffice to say that the continuous attack on customs and other security operatives in the state by some criminal elements will not deter us from sustaining the onslaught on their smuggling activities as we are determined more than ever before carry out this battle it to its logical conclusion,” the statement read.

CVFF:NIMASA In Close Consultation With Stakeholders