The Comptroller Nigeria Immigration Service Seme border Command, Comptroller (Dr.) Chukwemeka Dike while confirming this, said the 16 young men arrived from Ghana on Wednesday and were received from the Ghanaian Authorities in good health, as it appears. 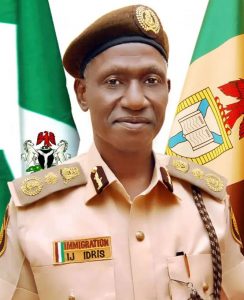 Speaking to Journalists at the NIS Seme border Command, Comptroller Dike stated that the 16 young Nigerians who were either deceived or intentionally went out of the country with the hope of getting Greener Pastures have been returned to the country and they are being investigated and profiled.

He promised that the NIS would do what is best to take care of these youths, “some of them that have been discovered to have actually been victims, we would hand them over to the appropriate quarters. While some others who have in the process of illegal sojourn incriminated themselves would also have to pay for their attitude,” he said.

Compt. Dike disclosed that he is in close contact with the Ghanaian Authorities who are indicating that they have harvested more Nigerians who are doing some unwholesome businesses in Ghana. ” We are having some synergy, good collaboration, very good partnership with the our counterparts in West Africa,” he stressed.
Continuing, the Comptroller said, ” we have severally warned and have advised kids, young people that are growing up to please look at deliberate means of survival, definite means of livelihood, he emphasised.

He continued by advising that “there’s no place under the Earth where everything is free or easy. The truth is that our partnership and synergy with Embassies and High Commissions all over the West Coast of Africa paid out because these boys were actually harvested and brought back from Ghana and the GEFC is accusing them of Cyber crimes.” 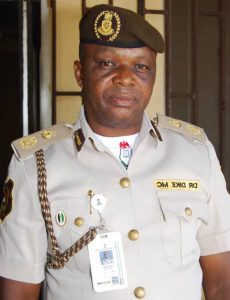 When asked how true the allegation is, Comptroller Dike said, “from our preliminary investigations, we discovered that some of these Lads were actually lured or cajoled into such activity but others went out with the intention and mentality of getting rich quick pervading some of our youths but a few persons may have influenced them, like from cursory investigation which shows that most of them were mislead into traveling and could not get the jobs and other things they were promised. In some cases, even restrained from returning to Nigeria,” he explained.

Furthermore, Dike said that cursory investigations show that all of them left through unapproved routes, without requisite and genuine travel documents to get to some West African Countries and when they got to Ghana, they became prey and it was easy for authorities to pack them together like this and bring them back to Nigeria. So what we are saying is that the institution of the Federal Government of Nigeria and by extension, the Nigeria Immigration Service ably led by the Comptroller General, Alh. Idris Isa Jere, prescribe that if you must travel outside Nigeria, it must be with genuine travel documents. The minimum is ECOWAS Travel Certificate (ETC). This will make it legitimate for you to leave the shores of Nigeria to live in any other West African Country,”he explained.

Explaining further, he said that “as ECOWAS members, we have a treaty of free movement of goods and persons within the ECOWAS subregion but the proviso is that you must enter such Country through a legitimate entry route and you must have genuine travel documents to travel. It’s also very important that those traveling must have definite means of livelihood, if you don’t, you would be seen as a liability and you will be returned.”

He therefore, admonished that people who travel must engage in genuine businesses “but the moment you engage in uninterpretable acts and behaviours you are arrested and brought back to Nigeria. So I plead with you young men to change, it’s still early in the day, most of you would say I am an undergraduate, I don’t have anything doing or, I have graduated, I don’t have anything to do. That is not a license to get into criminality. I want to plead with you to change and turn a new leaf, you can do it,”Compt. Dike advised.

Speaking with some of the 16 young Returnees randomly picked reveals a striking similarity in their tales, one notable fact is that all travelled without documents, almost all of them were lured by friends or older people who did not fulfill their own side of the bargain.
Michael Obadidi, an 18year old Secondary School leaver from Edo State, Albert Christian, 21, from Edo State, Azama Pascal (Edo) and Opia Samuel from Delta all have regrets and have advised other young men not to be deceived with the promise of Greener Pastures in a foreign country only to be lured into Cyber Crime and other shenanigans.

National Security on the Agenda