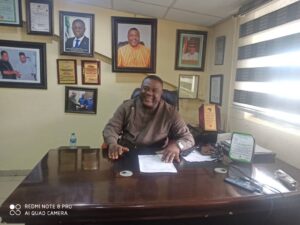 Frequent alerts by the Nigeria Customs Service, duplication of alert inputs has become a major hindrance to trade facilitation in Nigeria, so says
Comrade Emeka Enwelu, the CEO MCMannuel Logistics.

According to Enwelu, a case where you cannot lay hold of a particular Customs Unit when you get an alert on your cargo is worrisome.
It has become a new normal for valuation, enforcement, Customs police and CIU to input alert, the Customs broker or agent is at the receiving end when all are involved in this alert thing, it makes the job cumbersome.

Now, if it’s based on the discovery of infractions, the CIU should be the one to alert the valuation Unit to input alert for reappraisal of value when such happens, rather than these random alerts.

He questions the rationale behind alerts by the Customs police and their likes.

Enwelu advised the NCS to stop multiple alerts inputs forthwith, as a part to smoothening the rough edges of trade facilitation even as AfCFTA becomes operational.

Continuing, the MCMannuel boss explains that, ” the CIU has the right to input alert because they are visible in physical examination of all cargoes while the others are not, so it is the CIU that should put an intelligent report informing all other Units for a reappraisal of necessary values” he stated.

Comrade Enwelu fingered the TinCan Customs Command as one the Commands noted for duplication of alert inputs, “TinCan Customs is noted for these alerts, though it’s being scaled down but it is still rampant. Apapa was doing same before Controller Malanta came but it has been steppy down drastically.”

He clarified that alerts are usually put on jobs that were wrongly manifested or classified, ” some of these alerts are you discretional, as done by some officers when in doubt, to get conviction.”

He calls on the Commands to look at it technically, ” I am of the opinion that the CIU should put up their intelligence reports to various Units that will reappraise the value of consignments suspected for infractions,” he requested.

Furthermore, Enwelu said the Post Clearance Audit Unit has the power of modification, as well as appraisal of values which it carries out diligently.

Talking about the Terminal operators, Comrade Enwelu said, the clearing Agents are having problems with them in all areas, “if you book a job today for examination, they will never step down you container in the next one week, the APMT is the most notorious for this, it drops below 200 containers on daily basis and it comes with a lot pains to the agent and importer.
Then when you ask for one or two days waiver because of the delay in positioning your container for examination, they will never give you, it is extortion to say the least and it’s intended to swindle Nigerians.”
The APMT lacks space and manpower, they charge agents for their own inefficiency,”
the Nigerian Shippers’Council he says, should call them to order.

“The shipping companies claim to have holding bays but they are not functional, they and the terminal operators are our major problems, not even the Customs.