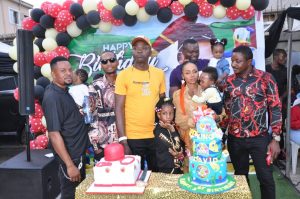 It certainly was
a resounding Birthday bash for Mmezu David Uchendu, the son of Fwdr. (Chief)  Eze Uchendu a.k.a Oso na chu Ikuku 1.

It was indeed a memorable day for the Uchendu’s as friends and family thronged and rallied around them to ensure their son’s birthday was celebrated with lots of razzmatazz.

The event which took place last Saturday, December 18, 2021, at the starklue Hotel and Lounge Marcity, Okota-Lagos was well packaged with fanfare, for people of all ages to come celebrate and have fun.

For younger children who attended in their large numbers, it was like Christmas came a bit early as they were extatic in celebration. The organizers ensured there was no dull moment for the friends of Master Mmezu David Uchendu, with varieties of games and dancing competition which thrilled both children and adults who responded with clapping and yelling, all glued to their seats as the MC and the kids took their rasping attention.

The Uchendu’s also gave the celebration a touch of class providing lots of gifts, especially school bags, toys, writing materials and to cap it all, lots candies and enough to wine and dine for kids and adults. 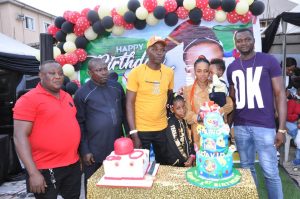 It was really an event for kids to look forward to as those who participated in the competitions won lots of goodies, with little Miss Doshima Ter Wase winning N10,000 for unlocking her dancing skills.

It was as expected, a grand and remarkable birthday celebration for a one old, with the parents ensuring that everyone who found time to come and identify with their young man was well entertained.