…as FMOT Moves Against 12% NIMASA Revenue to Maritime University 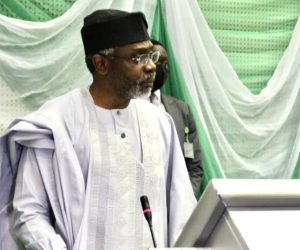 Speaker of the House of Representatives, Honorable Femi Gbajabiamila Tuesday announced that the 9thAssembly embarked on the Amendment of the NIMASA Act 2007 and the Cabotage Act 2003 due to the need to improve the regulatory instruments in the Nigerian maritime sector to meet the need of current realities.

The Speaker noted the need for appropriate regulation of the Nigerian maritime industry in tune with realities of the times to ensure maximum utilization of the nation’s maritime sector.

Taking her stand, Chairman House Committee on Maritime Safety Education and Administration Honorable Linda Ikpeazu said the public hearing was to ensure that the decision of the Legislature regarding the Bills are taken from well informed position premised on submisions from maritime stakeholders from all aspects of the industry.

She said: “It is common knowledge that the maritime sector is a foundation and catalyst to growth of nations that possess marine endowments. Nigeria, by any standard, is well endowed by ocean coastline, rivers, and a rich marine bio-diversity.

“Not only are we focused on making the maritime sector a key alternative source of revenue and economic growth to our dwindling oil resources, we are also poised to develop a prosperous blue economy for our nation, akin to similar success in the maritime nation around the world.

In his submission, the Honorable Minister of Transportation, Hon. Rotimi Amaechi, commended the National Assembly for embarking on the review of the Laws governing the maritime sector noting that the new NIMASA Bill under consideration, will enhance the capacity of the Agency to effectively regulate the Nigerian maritime industry in line with international best practice.

The Minister who was represented by the Director, Legal Service of the Ministry, Paul Oteh, however expressed reservation about the Agency funding the Nigerian Maritime University Okerenkoko. “The ministry does not support 12% of NIMASA revenue going to the University. The proposal, in our view, also does not recognize the fact that the university, like other public institutions under the supervision of the NUC and the Federal Ministry of Education, is ordinarily entitled to public funds as may be appropriated by the National Assembly on an annual basis.” The Director General of NIMASA, Dr Bashir Jamoh, who was represented by the Agency’s Executive Director Maritime Labour and Cabotage Services, Eng. Victor Ochei adopted the position of the Honorable Minister as NIMASA’s position.

However, the Nigerian Navy, on its own, supported the amendment of the NIMASA act, urging the National Assembly, to look critically at the security component of the bill to ensure that the relationship between the two agencies is enhanced.

In his presentation, the Chief of Naval staff, Awwal Gambo, who applauded the initiative, said it will improve NIMASA’s institutional capacity and enhance Maritime Administration in Nigeria.

Gambo who was represented by Rear Admiral Solomon Agada, said, “the provision of a separate section on marine casualty and the proposed establishment of a Maritime Accident Investigation Unit, will improve compliance with extant regulations, such as, the international regulations for preventing collision at sea, 1972 and thus enhanced Maritime safety.”

Also making presentations, were the Shipowners Association of Nigeria (SOAN), Nigerian Chamber of Shipping, WISTA, CIOTA Nigerian Welfare Board, National Association of Master Mariners amongst other stakeholders who
supported the proposed amendments to the two Acts of the national Assembly under consideration.