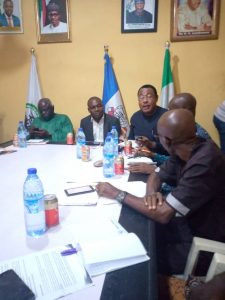 The National president of Association Nigerian Licensed Customs Agents (ANLCA), Hon. Iju Tony Nwabunike has called on the Federal government to stop the age long practice of giving revenue target to the Nigeria Customs Service.
Nwabunike who spoke recently at the review Maritime activities in the Q1 of 2021 organized by the Maritime Journalists’ Association of Nigeria in Lagos, decried the Nigerian government’s practice of always giving yearly revenue target to the NCS.

According to the ANLCA boss, giving target to Customs is a misnomer, a cog in the wheel of trade facilitation and counter to the dictates of government on the ease of doing business.

Continuing, he explained that the danger in this practice is that the Customs officers and Customs agents are losing grip of classifications in place of settling for the highest bidders.
He opined that giving target to Customs makes them lose grip of two of there major attributes; which are, trade facilitation and enforcement, in place of declaring huge revenue figures quarterly and at the end of each year.

He posited that government policies are actually some of the biggest hindrances in trade facilitation. He feels its antithetical for Customs to abandon their major attributes I’m place of drive,” he said.

Also speaking, the Registrar Academy, Mr Frances Omotosho, says CBN policy of restricting access to foreign exchange, especially, USD is really making it difficult for importers, ” PAR has become more difficult to get and it’s a big bottleneck defeating the essence of reducing human contact, that explains why they indiscriminately issue queries to draw freight Agents to their tables.”

Omotosho accused the Customs of operating an opaque single window by refusing to carry other agencies along.

He says
the recent ban on random selection is a big challenge to even the Customs and fright forwarder with many containers.

Continuing, he says, “education is the only way out of the myriads of problems facing the freight forwarding business.”
The conduct of freight forwarders he says, is a major hindrance, that is why officers of the NCS are manipulating and taking them for granted,” he said.