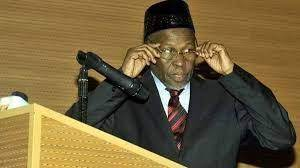 May head to NJC for redress

On July 4, 2021, the case was adjourned by Justice Tijani Ringim to 4th November, 2021 but surprisingly, the matter could not be heard today as it was presented for hearing by the lawyers representing the 3rd and 4th Defendants, Hadiza and Adesoye on November 3, 2021.

It will be recalled that in a written submission to the court, Emmanuel Ogboji, Esq. had deposed to an affidavit that he would withdraw his appearance for the 3rd and 4th Defendants due to the intervention of the Attorney General of the Federation (AGF), Abubakar Malami who had been mandated to appear in defence of them.

When the Plaintiffs and a medley of reporters from National newspapers. TV stations and their lawyer showed up at the court today, they were flabbergasted by the fact that the Court Registrar had moved the case one day backwards to 3rd November, leaving a smelly rat in the corner.

According to legal pundits, what happened today at the Ikoyi high court was a travesty of justice and judicial robbery. For instance, how do you hear a case 24 hrs before the adjourned date? The plaintiffs and others were in court at the first hearing on July 5 when the trial judge himself, after going through his diary, picked November 4 for the next hearing. Is this another case of Kangaroo court proceedings?

At the first hearing on July 5, the counsel to Hadiza was not present in court, so how come he was in court yesterday November 3rd? Who notified him that the hearing had been moved from November 4 to November 3?

To all intents and purposes, the Plaintiffs seem to have lost faith in the capacity of the court to serve the cause of justice and would require an apology from Hon. Justice Tijani Garba Ringim, failure which may warrant them reporting him to the National Judicial Commission (NJC).