The Barge Operators Association of Nigeria ( BOAN) ,are set to take advantage of the huge opportunities that the Lekki Deep Seaport provides ,for the economic benefit of its members and the association in particular.
President of BOAN,Hon.Olubunmi Olumekun gave this indication why speaking at the end of the year party of the association held in their Secretariat in Apapa last week.
Olumekun stated that the Executives and members of the association paid a courtesy visit to the Lekki free trade zone and the purpose was aimed amongst others to ,” Re- establish our presence and how we can leverage on the opportunities at the port” he said , stressing that a good partnership with the Lekki deep sea port would be mutually beneficial not only to both parties ,but also to the maritime industry and the economy.He noted that the association has shown good example on how an association should be run.
His words,” BOAN has proved to be a stellar example of how an association should be run,how the members should devote and commit themselves for the betterment of the organisation and how to efficiently and effectively keep on advancing towards excellence”.
He noted that the association had made some progress though not without some hiccups which he noted is to be expected from any association or gathering.
He outlined some programs and activities the association plans to execute in 2023 .
” It is our dream to encourage and improve on BOAN’s visibility, members welfare , acountability, especially in terms of finances and projects executions.We will organize from time to time,lectures and seminars on how to generate funds and access loans for BOAN members ,and how such funds can be managed or utilized more effectively for the benefit of our Association and our communities at large ” he said,adding that ,” It is also part of our goals, to continue the good works of our predecessors in terms of the established private partnership with both government and private companies”.
While commending the efforts of regulators such as Nigerian Ports Authority( NPA),National Inland Waterways Authority (NIWA),and the Maritime Administration and Safety Agency (NIMASA), amongst others,Olumekun also called on members to support the association by contributing ideas that would move the association forward
Olumekun said,” This is a clarion call to all association members to come and give a hand to better our business.”. In their goodwill message Department of State Security ( DSS), noted that it is important to revisit the gridlock on port access ways. The Secret agency noted that BOAN ,is critical to reducing the gridlock that is currently being experienced along the port corridors .It advised the association members to invest in modern barges,while stating that training of members and good behaviour on the water ways is critical to the organization’s sustainability.
On their part ,the National Drug Law Enforcement Agency ( NDLEA) advised the association to sensitize its members on dangers of drug abuse.According to the organization,” Human beings plus illicit drugs equals to early death” 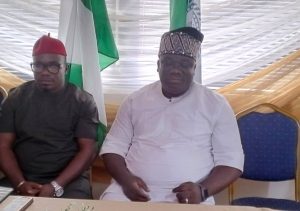