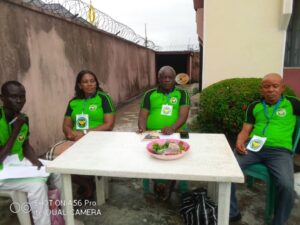 A Group known as Friends of Hamza Al Mustapha (FOHA), has called for the enthronement of good governance in Nigeria.

The group known as Friends of Hamza Al-Mustapha FOHA, is made up of supporters of the former ADC to late General Sani Abacha, Major Hamza Al-Mustapha, who is said to have presidential ambition for 2023.

The Chief Executive Officer, Bontex Nigeria Limited, added that the FOHA “is pregnant and we are expecting it to evolve into something bigger; we have the ambition of having it transform into a political party.

“Though we are not there yet but when we get there, we shall deal with whatever ills bedeviling this country, Nigeria.”

Chief Okoye, otherwise known as Bonntex, said that their ambition was to ensure that Nigerians got quality leadership by the turn of 2023, with Al Mustapha at the driving seat as the Civilian President.

FOHA, he said, was bringing out people of like minds who desired good governance for themselves and for Nigeria.

Continuing he said “Al Mustapha does not need an introduction; Nigerians know and respect him; he’s like a good product that sells itself. He is a goal getter, a very productive and proactive person, who is also a respecter of authority and hierarchy. We want Nigerians to come out for good governance. They should not sit back and allow others do it for them; they should come out and get fully involved in 2023,” Okoye.

He however disclosed that before 2023, the movement would unfold to make it possible for people to walk their talk, “to vote for the good governance they desire and not dwelling on the years of set backs we’ve had.”

FOHA, according to Okoye, was in every state of the federation, in every local government of these states including the Federal capital territory, Abuja.

He revealed that the paramilitary wing of FOHA Lagos, called the Conflict Resolution Committee (CRC), had been given the approval by the Lagos State government to mann the Mile 2 – Badagry Expressway.” The Unit, he said, had also been given an approval by the National Assembly and that it would soon be decorated alongside their leader, the national Chief Security Officer (CSO) of FOHA, Kenneth Garuba.”

On how the group intends to get Nigerians behind its movement, Chief Okoye said it would before the inauguration begin to show government in action by helping the widows, the less privileged, the indigents by empowering them to be useful to themselves, their families and society.

Also speaking, Mrs. Ifeoma Nwabulue, the Secretary, FOHA Lagos, said the group constituted people of like minds and “we are happy with what we are seeing.Though we are not yet a political party but we are hopeful we shall get there to bring about the necessary change that would usher in good governance. That’s why we gather here to talk to one another, to contribute one way or the other, to help our patron, Hamza Al’ Mustapha.”

According to her, the focus is about the needs of the people and the group trusts that when given the nod, Al Mustapha would enthrone good governance with the experience garnered at the military. He has followed well and we trust he will make a good impression as a leader.”

On how soon they Intend to put plans to work, the Lagos Coordinator said “FOHA is still at the planning stage, though we have a name we are nurturing, ‘The Green Party of Nigeria’ but once all arrangements are concluded, we shall come public with our declaration, ” he declared.

Lagos FOHA will tentatively be launched in October, this year, all things being equal.

Al Mustapha, he added, “is a game changer, he knows what to do to get the people behind him.”